While in Barcelona, you must do as the locals do and visit a tapas bar for a delicious array of appetizers or snacks. Tapas can be hot or cold and are always served in small portions. Whether you’re making a full meal of tapas dishes, or just grazing until it’s time for dinner, there are several divine dishes to try while experiencing tapas.

Making use of ingredients such as cured meats, Spanish cheese, fresh seafood, and seasonal vegetables, tapas bars offer something for every kind of diner. Keep reading to discover the top 10 tapas dishes to try in Barcelona.

One of the most famous tapas to try in Barcelona is the Croqueta. Crunchy on the outside, creamy and steaming hot on the inside, these golden, fried nuggets can be filled with a variety of tasty stuffing that makes them all the more delectable. You’ll get the chance to try Croquetas stuffed with Jamón, which is one of the most popular choices for tourists. The classic filling consists of salted cod, otherwise known as bacalao. The strong and delicious flavor is something you’ll savor long after you leave Barcelona.

Located on the coast, Barcelona boasts some of the freshest seafood you’ll ever try. Even if you don’t normally enjoy fish, you have to sample some while you’re here—you won’t regret it! The famous Mercado de La Boqueria offers incredibly fresh seafood in case you want to buy your own and take a cooking class.

Brocheta de Camarones, or shrimp skewers, are so good that you won’t be able to stop at just one. You’ll keep going back for more and more of these deliciously seasoned and grilled tapas. You can also get the skewers with mushrooms for a new dimension of flavor.

Montaditos are fun-sized open sandwiches that you’ll be obsessed with. Barcelona’s answer to the Danish smorrebrod, these tapas are named because the toppings are “mounted” on a small piece of bread. Adapted from influences that come from overseas, this is truly a tapas that you must try while in the city.

There are several toppings that you might find on your Montadito. Fans of seafood should opt for caviar or even cured tuna and Spanish cheese. You can also get vegetarian Montaditos that are served with toppings like grilled sliced mushrooms, tomato, and avocado.

You probably won’t realize how scrumptious green peppers can be until you arrive at a tapas bar in Barcelona and sample Pimientos de Padron. A simple dish, Pimientos de Padron typically includes only the peppers themselves, salt, and a little splash of olive oil, but it’s seriously amazing.

This is a good one to try if you like a little spice to your food since some of the peppers are packed with heat. Others are completely mild—you won’t know whether you’re in for some bite or not until the peppers are already in your mouth!

Perhaps the most versatile and beloved ingredient in Spanish cuisine, Jamón is a rich air-dried ham that makes its way into several tapas dishes, as well as other dishes in the local culinary tradition. Some argue that the very best type of the cured meat is Jamón Iberico de Bellota.

This version is made using the meat of Iberian pigs. These pigs feast on wild acorns, or Bellota, which make their fat taste slightly nutty, giving a unique flavor to the Jamón that they produce. According to the Late Rooms travel blog, this is one unmissable ingredient to sample in Barcelona. 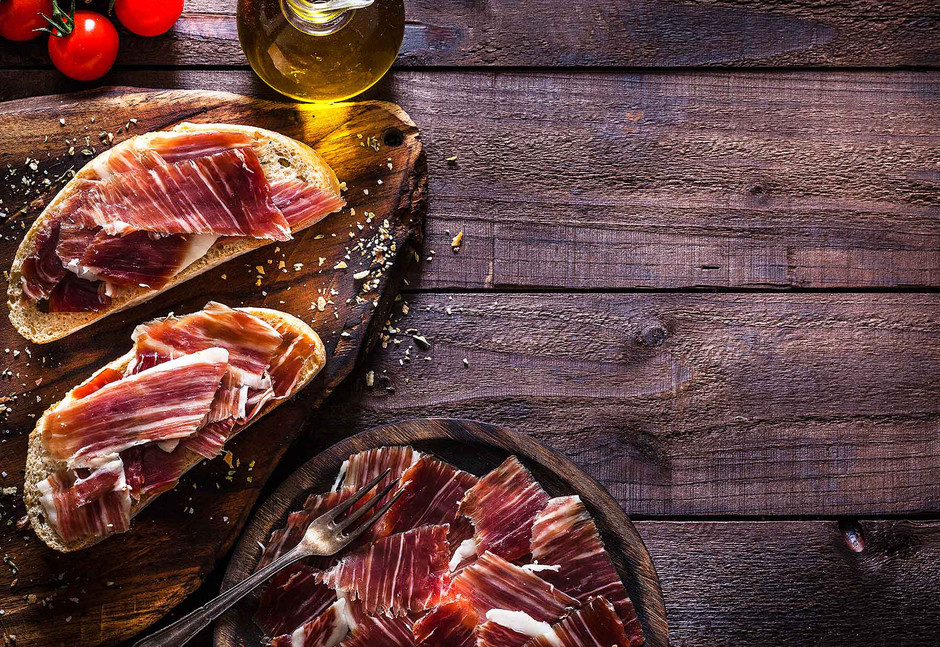 And you thought France was the only place you could get snails! Cargols are a savored delicacy in Barcelona and are a traditional example of genuine Catalan cuisine. One of the most popular ways to have them is Cargol a la Llauna, which basically sees the snails served on a tin in a spicy tomato sauce.

This dish may sound confronting and exotic to some travelers, but it is definitely worth trying. Don’t let the thought of eating snails put you off and dive into the dish with your mind open!

The ultimate comfort food, Bombas originated from the district of La Barceloneta. These balls essentially consist of potato and minced meat that’s been deliciously deep-fried. They’re not great for the old ticker, but they do satisfy the taste buds.

Often, Bombas are served with a spicy sauce and topped with aioli. It doesn’t get any better! Several tapas bars in Barcelona produce their Bombas from scratch, often using their own secret recipe to set them apart from the crowd and make a name for themselves among connoisseurs of the iconic dish.

Another example of divine seafood on the tapas menu in Barcelona is Navalles, a long shellfish that is sometimes called a razor clam. The dish is very simple. The clams are mostly grilled or sautéed with just a little olive oil, salt, and garlic, and then served with lemon and possibly some parsley.

While in Catalan they are called Navalles, in Spanish the clams are referred to as Navajas. You will also find them canned in supermarkets and delis, and are one of the most popular types of Spanish seafood.

Closely resembling the Italian bruschetta, Pa amb Tomaquet is another example of how the simplest ingredients can come together to create something truly magical. The toasted bread in this tapas is rubbed with a local variety of tomato and seasoned with salt and olive oil. Deliciously easy to make and to eat, this is often a favorite of kids trying tapas for the first time.

Pa amb Tomaquet is available in most restaurants in Barcelona, as well as tapas bars. A perfect way to start the meal, this is definitely one you have to try!

Pulpo a la Gallega may seem a little exotic to some travelers, but it will more than likely become one of your favorite types of tapas. Consisting of octopus and potatoes seasoned with paprika, the tapa is the ultimate testament to the surf and turf tradition.

Originating from Galicia in Spain’s northwest, this is another of the most popular seafood dishes in Spanish cuisine. In the tapas bars of Barcelona, you’ll find it conveniently served at the end of a toothpick. It’s too easy to keep going back for more!

Is shopping in stores safe during the pandemic?